ECONOMYNEXT – Sri Lankan health officials identified 655 new COVID-19 patients over a 24-hour period that ended at 6am today (14), the National Operations Centre for the Prevention of COVID-19 (NOCPOC) said.

Of the newly identified patients, five are returnees from abroad while 650 are from local clusters.

According to NOCPOC, the local cases break down as follows: 444 from Colombo, 75 from Gampaha, 41 from Ampara, 22 from Kurunegala, 19 from Kalutara, five from Rathnapura, four each from Anuradhapura and Matale, three from Puttalam, two from Matara, one each from Kandy, Batticaloa, Trincomalee and Monaragala. A further 27 cases were from the community whose origin could not be confirmed.

With the new cases, Sri Lanka’s total patient count has increased to 32,790 with 8,845 active cases and 444 under investigation in hospitals. 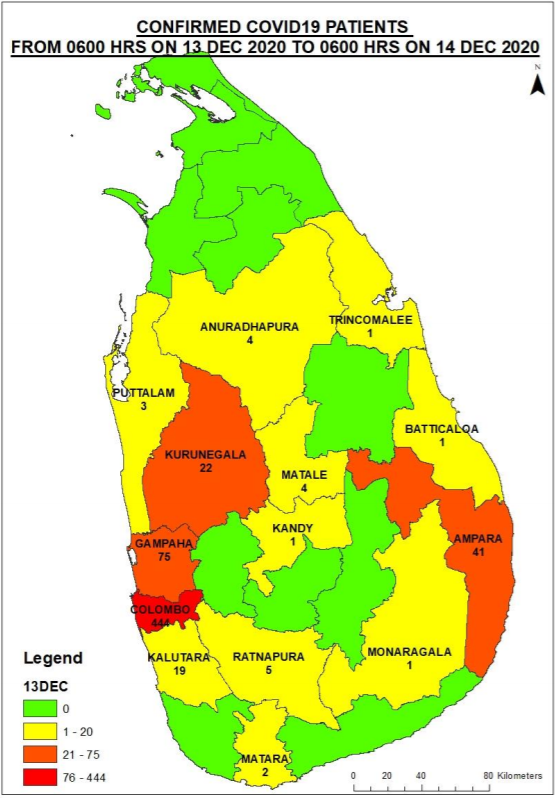 NOCPOC reports show the majority of cases identified within the past 24 hours in the Colombo districts are from the Colombo Municipal Council area.

Officials said the number of patients in Colombo and Gampaha has shown an increase and also a surge in other areas such as Ampara and Kurunegala can be seen.

As at 6am today, 489 Sri Lankan patients returned home upon recovery, bringing total recoveries in Sri Lanka to 23,793.

The number of patients reported from the Minuwangoda and Peliyagoda clusters has increased to 29,148, with the new positive cases identified. (The Minuwangoda cluster is at a total of 3,059 cases, with 1,041 employees of the apparel factory and 2,018 close contacts testing positive for the virus).

A total of 20,385 patients from the two clusters have recovered by December 14, NOCPOC said.

NOCPOC reports showed that after the first positive case of the Peliyagoda cluster was discovered by health authorities on October 21, and by December 14 it has increased to 26,089.

Total COVID-19 positive patients found among returnees to the country are 1,662.

The number of people in quarantine in 76 centres run by the armed forces is 7,211.

Sri Lanka recorded three new deaths yesterday bringing the total death count in the country due to COVID-19 to 152.

The deceased are two females and a male from Colombo 10, Wattala and Matale areas.

By this morning, 92 returnees arrived in Colombo: 50 from UAE and 42 from Qatar while another 42 from China, seven from Maldives and six from Pakistan are also expected to return, NOCPOC said, adding that all returnees will be directed to military-run quarantine centres.

Commander of the Sri Lanka Army Lt Gen Shavendra Silva said all the returnees who complete their quarantine at a government facility do not need to be further quarantined at home for 14 days.

A total of 1,017,682 PCR tests have been conducted in the island so far, with 15,239 tests carried out yesterday, NOCPOC reports said, adding that the results of some PCR tests are still pending.