ECONOMYNEXT – Sri Lanka’s organic municipal garbage could be digested with black soldier fly larvae, little creatures that are triggering a revolution in the West and East Asia by turning organic waste into valuable animal feed, householders who have experimented say.

The voracious little larvae, which look like plump ribbed worms, will devour kitchen waste in a day, consume fish, meat offal and bone, before they decay and start to emit odour, depending on the number of larvae living in a digester. In Western nations including the US and Asian nations from, China, Indonesia (link) and Vietnam, black solder ‘wonder larvae’ is increasingly commercially grown, fed organic waste to produce animal feed.

In Sri Lanka black soldier fly is naturally found in the island’s tropical environment and it is quite easy to get them to colonise a household composter, according to persons who use them to digest household waste.

There is no need no need to capture larvae induce them to mate and collect eggs, unlike in Western countries, according to experiments run in a standard suburban house with a small garden. If a house has an ornamental foliage or a tree producing leaf litter it is easy to get the larvae to grow. 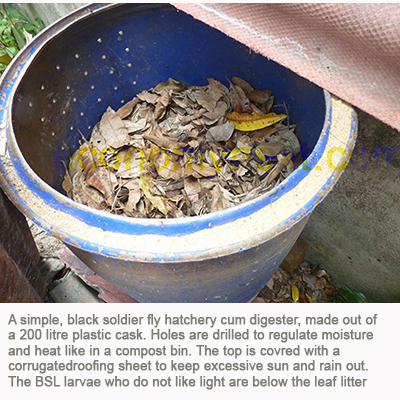 "Kitchen offal buried in a compost bin full of leaf litter provides one of the most hospital environments to attract and induce an adult soldier fly to lay eggs," a householder in Sri Lanka’s capital who has experimented with black soldier fly larvae said.

"In the US, corrugated cardboard is hung above the trash to help the flies lay eggs, but leaf litter is extremely effective. You can have a digester teeming with the larvae in a matter of days.

"Leaf litter also has the advantage of blocking light, allowing the larvae, which suffer from photophobia to thrive and digest the garbage without interference.

"Leaf litter can also block odour from organic waste, when you first dump them in, until the larvae gets to work."

The adult black soldier fly (Hermetia illucens) is about 1.5 centimetres long and looks like a wasp. A soldier fly can sometimes be found inside homes trapped in glass windows, but is easily mistaken for a wasp or other insect by an untrained eye.

People do not usually notice soldier flies as they do not buzz seeking food around like other flies. A soldier fly only takes in water and does not eat.

A BSF lays about 600 eggs after mating and dies in a few days, with the energy stored in the body running out. The eggs hatch in four days, and the larvae will start eating and grow fast, or slowly, depending on the availability of food. Multiple larval stages may last up to four months or more according to published literature.

The digester should be covered with a corrugated roofing sheet or similar material so that gravid females can easily to enter and lay eggs. A cover with easy ventilation sheet will also allow excess moisture to escape and prevent leachate.

After it is fully grown, the mouthparts of a larvae modifies itself to a leg and it will climb out the feed material seeking ground to borrow and pupate. A ramp built into a composter will help the mature larvae walk into a waiting container and effectively ‘self-harvest’ themselves.

The larvae can be fed to fish or chicken or birds. BSF larvae is said to contain around 40 percent protein and 30 percent fat. Commercial production involves drying and making food pellets. In a house with a garden, the digester bin can be put in a corner or a flower bed and the mature larvae can be allowed to just crawl out and borrow in to the ground according to persons who have observed the phenomenon. Birds, such as yellow billed babblers, commonly found in Sri Lanka’s suburbs, will dig them up and eat.

The adult soldier fly that comes out of the pupae does not have mouth parts and does not pose a threat of carrying diseases according to published data. They live for a few days with energy stored in their bodies, mate, lay eggs and die.

When well-established with BSF larvae, houseflies and blue bottles are not attracted to the bin. It is believed that the larvae secrete a chemical that keeps out flies and insects like houseflies will not lay eggs. The lack of odour may also be helping keep flies out.

A householders who studying them say when malodorous seafood offal is put into a digester one or two flies may be attracted for a few hours until the larvae gets to work and devours the softer and most moist material. After that the flies disappear.

BSF larvae do not consume dry leaf (cellulose) but raw vegetables and fruit. Leaf litter will compost at the usual slow rate of decay in the digester. BSF larvae will also digest excrement including from humans, farm animals and chicken.

However in the case dung of grass eaters like cows, which have more cellulose they will not be able to reduce by volume as effectively. (Colombo/Oct06/2017)