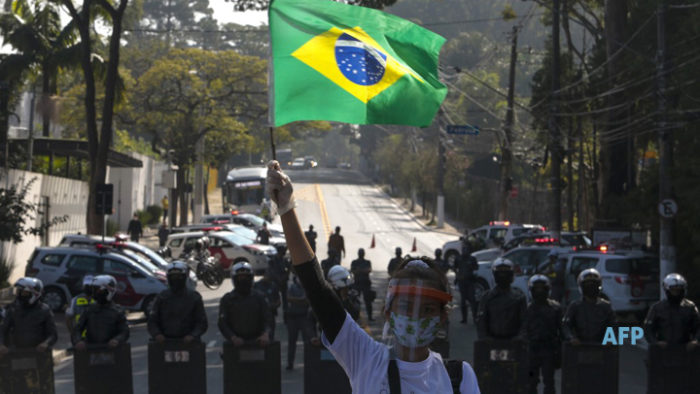 LATIN AMERICAN HOTSPOT: A resident of Paraisopolis, takes part in a protest in Sao Paulo, Brazil, on May 18, 2020, to demand more aid during the COVID-19 coronavirus pandemic.

Here are the latest developments in the coronavirus crisis.

South America has become “a new epicentre” of the pandemic, the World Health Organization (WHO) says, following a surge in the number infections, pointing to a particularly worrying situation in Brazil.

– Russia prepares for the worst –

Russia, the country with the second-highest number of infections in the world, will see a “significant mortality increase” in May, Deputy Prime Minister Tatiana Golikova says.

China praises its own response to the coronavirus outbreak, Premier Li Keqiang saying Beijing has made “major strategic achievements”.

Li says China now faces “immense” economic challenges — it has not set an annual growth target for the first time in decades.

The pandemic has killed at least 335,538 people worldwide since it surfaced in China late last year, according to an AFP tally at 1900 GMT on Friday based on official sources.

There have been more than 5,158,750 officially recorded cases in 196 countries and territories.

– No benefits from chloroquine –

There is no benefit in treating coronavirus patients with anti-viral drugs hydroxychloroquine and chloroquine and they even increase the likelihood of them dying in hospital, according to a study published in The Lancet.

The pandemic is putting at least 80 million children’s lives at risk by disrupting routine immunisation programmes against killer diseases like diphtheria, measles and pneumonia, the WHO and UNICEF say.

Britain is to introduce a quarantine period of 14 days for those arriving in the UK, Northern Ireland secretary Brandon Lewis says.

Madrid and Barcelona, until now excluded from Spain’s loosening of lockdown restrictions, will be able to reopen museums, hotels and bar terraces from Monday.

Iceland says it will reopen discos, bars and gyms next week.

Florence’s Duomo cathedral, one of the Tuscan city’s top tourist attractions, opens to the public on Friday for the first time since March.

France will hold a second round of municipal elections on June 28 after they were called off in March because of the lockdown, Prime Minister Edouard Philippe says.

US President Donald Trump demands that state governors allow places of worship, including churches, synagogues and mosques, to reopen immediately, describing them “as essential places that provide essential services”.

– US billionaires get richer –

The fortunes of 600 US billionaires rose 15 percent in the two months since the coronavirus pandemic hit, as tech stocks rose during lockdowns, a think tank study finds, with Amazon boss Jeff Bezos and Facebook chief Mark Zuckerberg seeing massive gains.