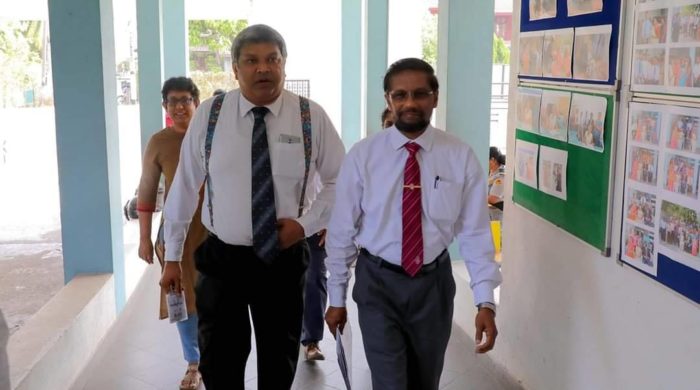 ECONOMYNEXT – Sri Lankan voters are faced with an important choice in the run-up to the upcoming parliamentary polls and must prioritise their democratic and economic rights when making their decision, Former Chief Epidemiologist Dr Nihal Abeysinghe who is contesting the election on the National People’s Power (NPP) ticket said.

In an exclusive interview with EconomyNext, Abeysinghe warned that Sri Lankans would have to fight for their democratic rights in the future if the status quo continued.

“Economic concerns are also important. Especially after the Covid-19 situation, all Sri Lankans realised they could not survive more than two months [in the current economy]. The government had to provide 400,000 families with Rs 5,000 for them to survive. The people felt that our economy is very unstable and we’re in a very bad position. Now they have realised that it’s very difficult to maintain their lives with this economy,” he said.

Come August 5, said Abeysinghe, people will have to take this dire situation into consideration and ensure their children have a better future.

People living in rural areas have been  hit extra hard, he said, and yet they continue to vote for the two main camps.

Explaining his decision to enter active politics, Abeysinghe said after a 35-year career that saw stints at Sri Lanka’s Ministry of Health (he was Chief Epidemiologist when he left the ministry in 2008) and at the World Health Organisaiton (WHO) Southeast Asia regional office working on vaccine preventable disease in the region, he decided he was not happy with the situation in the country and the way the country has been governed since independence.

“When I returned to Sri Lanka in 2016, I realised that the country’s politics is not going to change, because in the 2018 local government election, people just voted [emotionally],” he said.

Abeysinghe and several of his colleagues in the health sector and academia formed a discussion group which expanded over the past few years. They developed a set of policies for the country and decided to contest the upcoming polls and challenge the two main camps.

“We then tried to discuss with all progressive groups including the left parties and civil society organisations,”

Abeysinghe and his colleagues decided that their views and proposals aligned the most with the Janatha Vimukthi Peramuna (JVP)-led NPP.

“That’s how I joined this camp,” he said.

Asked if the JVP was engaged in a strategic rebranding exercise in forming the NPP alliance, Abeysinghe said he did consider it.

“We discussed it. We can see that since 1965 when the JVP came into the political arena, no other left political party has been able to win over the public during the past almost 50 years. We realise their strategies were not acceptable to the people of this country and it created a lot of difficulties to the nation. It’s not just them, however. The then governments too tried to keep them away from democratic politics,” he said

Having taken into account the JVP’s record since embracing democratic electoral politics since 1994, said Abeysinghe, as well as wider society’s acceptance of the JVP as a democratic party, he and his colleagues thought they should align with  a broader JVP-led alliance.

“We realised they have their strengths and they have a very good organisational capacity, and we thought without them it’s very difficult to develop a third force. That’s why we thought we’d use them and discuss with them [the possibility of an alliance]. We held negotiations. The JVP was very pleasant during discussions because they agreed to change their party name, leave out their symbol, and agreed to form a new party. That is how we have come with the NPP and the new symbol compass,” he said.

Given that a majority of Sri Lankans live below the international poverty line, people are spending more than they earn – a reality brought home by the recent lockdown, with many people needing a government handout. Asked what solution the NPP offers the people in this regard, Abeysinghe advocated taking industry to the country’s underprivileged peripheries.

“In our policy document, we have clearly stated that currently all industries in this country are basically in the western province. The industries should move to the other provinces and we need to elevate the living conditions of the people in those areas. When you go to the remote areas they do not have adequate health or education facilities. Professionals do not want to stay in those areas because the facilities aren’t there. We need to take the industries to the periphery,” he said.

Abeysinghe further said the party has formulated a policy framework for fair pricing for agriculture products that is beneficial to both producer and consumer.

The NPP is also for increasing direct taxes over indirect taxes and for collaborative economic relations with developed nations, said Abyesinghe.

“We can go for collaboration like other developing countries. Countries like Vietnam, Cuba have already gone for very good collaboration with the developed countries, making a profit out of those relationships. There’s probably a place for Sri Lanka to go for something similar, to our benefit,” he said.

Emphasising the need to support families who are dependent government subsidies, Abeysinghe said the people must evolve from the mindset of being grateful to ruling parties for assisting them with public funds.

“I visited a village in Horana where about 362 families are all self employed. But that self employment is supported by a government machinery. So they think they need to vote for that particular government. But these governments are using public money to get people out of poverty. We need to convince the public that it is everybody’s money so everybody has to benefit,” he said.

The NPP also promises to prioritise sports and recreation as part of their education policy, he said.

“Education, health, sports and recreation, we think those are very necessary to make a productive human being. We’re planning to invest more in those, because we need strong personalities to develop the country,” he said.

“There are so many other proposals in our policy document that will really help people decide in this election,” he added.

“People have gotten used to a certain amount of comfort and a bit of peaceful life after 1977. I don’t think people be willing to go back. So we need to bring investors into the country and go for collaborative efforts. We plan to have a balance. Once we uplift the situation of the people in the periphery, I’m sure their contribution to the economy will be greater,” he said.

“If we can have skilled labour in this country, I’m sure it’ll bring a big change to the country’s economic situation. We’ll rely on the change in the education system and have a skilled labour and knowledgeable labour market, and I’m sure that investors will be very happy to have that type of labour market in Sri Lanka,” he said. (Colombo/Jul30/2020)