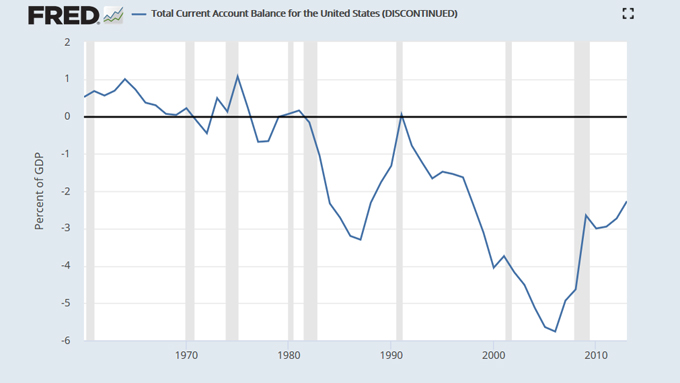 ECONOMYNEXT – Sri Lanka has recorded surplus in the external current account in 2019 for the first time in a decade, Central Bank Governor Indrajith Coomaraswamy said, as the country’s bank credit is contracting in the wake of a collapse of a soft-pegged exchange rate with the US dollar.

"For the first time in 10 years in the first quarter of this year, there was a surplus in the current account of the balance of payments," Governor Indrajit Coomaraswamy told reporters after a monetary policy announcement.

"Of course it’s only one quarter, but still it’s a positive development."

He said the rupee had appreciated 4.1 percent against the US dollar in 2019.

In April 2009 the rupee was floated, after defending and printing money amid capital flight. The rupee fell to 120 to the US dollar and appreciated to 114 by the year end as private credit contracted and the central bank also mopped up inflows.

Sri Lanka has a current account deficit mostly because the government is a net borrower abroad to fund its budget deficit. A net repayment of debt (capital outflows), which are not accompanied by money printing, will tend to generate a surplus in the current account.

With private credit contracting central bank has been able to mop inflows and build up forex reserves (a so-called below-the-line outflow of capital).

Most East Asian nations tend to record current account surpluses because the central banks in those countries tend to consistently mop up inflows to maintain strong or appreciating exchange rates, analysts say.

Free capital accounts also allow domestic firms to invest abroad, which tends to generate a current account surplus as well, especially when government budgets are balanced or are in surplus like in countries such as Germany.

However countries like the US whose debt is bought by soft-pegged central banks in Asia, the Middle East and Latin America tends to run a chronic current account deficits, a phenomenon labeled the ‘twin deficit’. At one time Japanese foreign direct investments also boosted imports and the current account in the US.

The US however ran trade surpluses during Marshall plan years when foreign aid to Europe was recycled as export demand. The current account started to turn negative in the run up to the collapse of the Bretton Woods and has never ‘recovered’ since.

Governor Coomaraswamy said it would be better if Sri Lanka was able to record a current account surplus with growth of around 6 percent.

Energy SOE borrowings usually push up the external current account deficit, which contributes to the balance of payments crisis in the soft-peg which later triggers the credit bust analysts say. (Colombo/July17/2019)