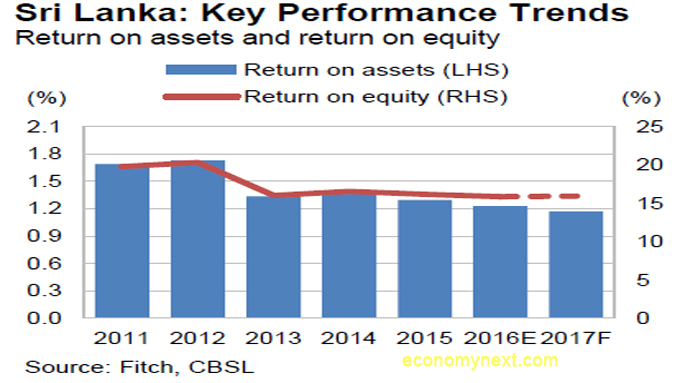 ECONOMYNEXT – Fitch Ratings said it has lowered its sector outlook for Sri Lankan banks to negative from stable, saying operating conditions have become more challenging, with bad loans expected to rise and profitability to fall slightly.

Fitch expects rising macroeconomic pressure to strain banks’ credit metrics, in particular asset quality, the rating agency said in its 2017 Outlook for Asia-Pacific banks.
.
“Fitch expects downside pressure on growth in 2017, and for real GDP growth to be around 5%,” the report said.

Sri Lanka could face a period of adjustment that could dampen economic performance in the short term after its deal with the International Monetary Fund in June 2016, and also remains susceptible to difficult global conditions, it said.

“This is because bank credit profiles are sensitive to the sovereign’s credit profile, and also to risks stemming from the operating environment in the absence of a build-up of adequate loss-absorption buffers.”

Fitch said it expects a deterioration in asset quality to become more apparent in 2017 in the aftermath of lending to more susceptible segments, and for bank Non-Performing Loan ratios to rise amid a more challenging environment.

“The decrease in the sector NPLs throughout most of 2016 has resulted mostly from a reduction in NPLs from gold-backed lending, and this is not expected to continue to mask incremental NPL formation for the sector,” the report said.

The rating agency also expects bank lending to moderate in 2017 alongside higher interest rates and reduced consumption demand after the continued rise in credit demand this year prompted the Central Bank to raise rates and impose higher reserve requirements to curb credit expansion and inflation pressures.

“Stronger capital buffers are desirable to counterbalance structural balance-sheet issues and to absorb unexpected losses,” it said. “There has not been much Tier 1 capital-raising, and banks could face challenges in raising capital.”

A potential increase in credit costs could offset the benefit of a possible improvement in net interest margin and result in a slight decrease in profitability, Fitch Ratings also said.

It noted that funding-cost pressures have risen and competition for deposits has increased although banks’ liquidity should continue to be supported through a stable deposit base with customer deposits comprising the bulk of banks’ funding, at about 68% of assets.

Fitch said negative rating action could also result from pressure on bank credit profiles through an increase in risk appetite – such as sustained rapid loan expansion or rising exposure to more susceptible segments – unless it is counterbalanced through higher capital buffers and stronger risk management.
(COLOMBO, Dec 9, 2016)