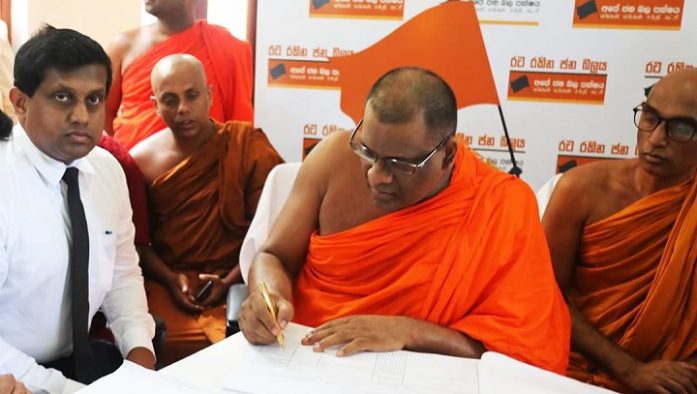 The duo handed in their nomination papers yesterday with Gnanasara Thero contesting from the Kurunegala District and Rathana Thero from Gampaha, the spokesman for the Bodu Bala Sena Eranda Navaratne said.

He told EconomyNext that former three-time cabinet Minister Jeewan Kumaranatunga and several others from the Sri Lanka Freedom Party were also contesting under this party ticket in Colombo.

Navaratne also said that “some members of the Global Sri Lanka Forum” were also joining this party to contest the April 25 election. Final decisions as to who would be contesting will be taken later today, Navaratne said.

This decision to contest goes against the wishes of the top-most Buddhist Clergy in the country as both the Mahanayakes of the Siam Chapter have urged amendments to election laws to ban Monks from contesting.

Earlier this month the Mahanayake of the Asgiri Chapter Warakagoda Sri Gnanarathana Thero told the elections commission to amend the laws.

“The Buddha Sasana would benefit greatly if the monks were not allowed to contest elections” Gnanarathana Thero was quoted as saying. “The existing election laws were outdated and those who formulated them may not have expected Buddhist monks to contest elections.”

Gnanasara himself said that he was eschewing electoral politics in a Press Conference given after the presidential elections that brought Gotabaya Rajapaksa to power.

The BBS has contested elections in the past but has not entered Parliament.

Last year Gnanasara held a large rally that brought thousands of Monks to a stadium in Kandy where he urged all political parties not to nominate candidates from minority communities.

“We must cleanse our Parliament of the minority parties as they are king-makers,” Gnanasara Thero told the rally.

The Parliamentary Sectoral Oversight Committee on National Security also recommended that political parties based on ethnicities or religions be “phased out in the space of two to four years.”