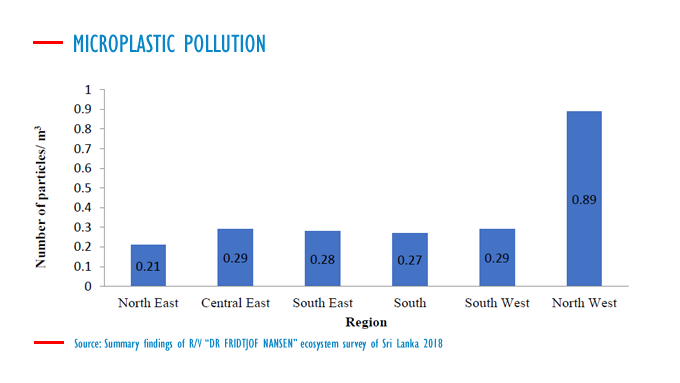 ECONOMYNEXT –  Researchers have found the highest level of pollution by microplastic particles in the coastal waters off Sri Lanka’s North West during the South West monsoon season, and the lowest in the North East.

Microplastics are small particles plastics either originally made or degraded from lager items.

Researchers from Institute of Marine Research (IMR), Norway and the National Aquatic Resources Research and Development Agency (NARA) of Sri Lanka found the highest concentration of 0.89 particles per square meter of sea water in coastal waters of the Gulf of Mannar area.

"The results reveal that the waters around Sri Lanka are contaminated with microplastics, and the vast majority of microplastics found are in the secondary category, indicating that the packaging material, industrial applications, and fishing gear are major sources," a preliminary analysis of findings said.

"The highest concentrations were found in the off North Western region of Sri Lanka.

"This region was highly polluted with microplastics, compared to other regions, while the northeast coast and the south coast showed the lowest number of microplastic particles in the samples."

The lowest concentration of 0.21 particles/m3 was found in North East coastal waters.

Dr. Fridtjof Nansen, a Norwegian research vessel made a broad ecological survey for Sri Lanka’s coastal waters during June and July 2018 the survey during the South West Monsoon season.

It was not clear why the North East waters were most polluted. The North West seas are sandwiched between Sri Lanka and India.

"The survey covered one season of the year, and the results as such are a snapshot," researchers said.

Higher concentrations have been found at lower levels and in the seabed as particles sink in other studies. Research in other areas of the world have found pollution of less than one particle, to a few particles to a thousands of particles per cubic meter in so-called hotspots.

Microplastics may affect marine life. It is an emerging area of study. (Colombo/Jan30/2019 – Update II)