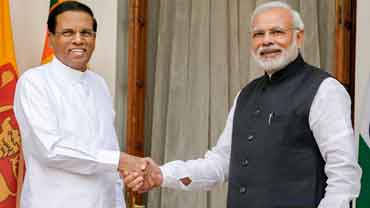 Modi, who is only the second foreign leader to visit the battle-scarred region, will launch construction of a cultural centre and hand over houses to 50,000 families that lost their homes in the decades of fighting.

His brief visit is seen as hugely symbolic, particularly after he called on the majority-Sinhalese government to fully implement a 1987 constitutional provision on greater autonomy.

"Sri Lanka has lived through decades of tragic violence and conflict," Modi said, referring to 37-years of ethnic war which killed at least 100,000 people, mostly Tamils.

"You have successfully defeated terrorism and brought the conflict to an end. You now stand at a moment of historic opportunity to win the hearts and heal the wounds across all sections of society."

Modi told the Sinhalese-dominated parliament in Colombo that "cooperative federalism" was working well in India and suggested it could be a model for Sri Lanka too.

A Tamil council was elected in September 2013, five years after the war ended, but it lacks legislative authority.

India has long supported greater autonomy for the minority group, but Suresh Premachandran, a Tamil lawmaker from Jaffna, said Modi’s comments were the strongest in a long time.

"He is going to be very welcome after the powerful message he sent," Premachandran told AFP.

Tens of thousands of troops are still garrisoned in Jaffna despite international calls for a scaling-back of numbers, although there were few soldiers in evidence there ahead of Modi’s visit.

While reconstruction has begun in some parts of Jaffna city, many neighbourhoods and surrounding villages are still strewn with rubble as a legacy of the heavy bombardments that they endured over the decades.

On his way to Jaffna Modi will stop at the north-western town of Talaimannar, the closest point to India, to flag off a train service restored after decades of war.

He will be only the second world leader to visit the peninsula after British Prime Minister David Cameron, who travelled there during a Commonwealth summit in Colombo in November 2013.

Modi will also stop at a Buddhist temple in the historic north-central city of Anuradhapura that is home to a tree worshippers believe was grown from a sapling from the one that sheltered the Buddha over 2,500 years ago.