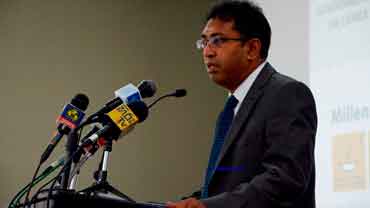 Harsha de Silva, a former Deputy Minister of Policy Planning and Economic Affairs, said the island’s competitiveness had fallen in recent years but the new government aims to make it the most competitive economy in the region.

"Amending legislation will happen at the speed of ‘greased lightning’," he told the annual general meeting of the Spices and Allied Products Producers and Traders Association.

“The main reforms required will be done in the first six months, although some will be difficult to swallow.”

Previous administrations of the United National Party of which he is a member had done reforms within similar time frames of getting elected, de Silva said, referring to UNP governments in the late 1970s and 1990s.

“We will cut through all red tape for investors,” de Silva said. “Let me give you the assurance that we are not going to stop until we put policies in place to increase exports not 10-15 percent but by several fold.”

De Silva advocated tough action against politicians who become corrupt after being appointed as Cabinet ministers, noting how corruption in the ousted Rajapaksa regime had deterred foreign investors.

A proposed investment by German car manufacturer Volkswagen, now the world’s biggest automaker, never came through under the Rajapaksa regime as the “transaction cost was so high, the investment was not worth it,” de Silva said, alluding to bribes.

“The first minister who gets caught cheating (in the new government) should be put in jail,” he declared.

The new government has launched several probes into allegations of corruption under former president Mahinda Rajapaksa, who has denied any wrongdoing.

Politicians in the proposed new national government between the UNP and the main opposition Sri Lanka Freedom Party will share responsibilities, not just through ministries but by involvement in parliamentary oversight committees, de Silva also said.

“Most elected members will have some responsibility. It will be different from the traditional government versus opposition (pattern). It will be something we have not seen before.” (Colombo/August 23 2015)