Paul Volcker, the man who tamed the Fed, dies at 92 ECONOMYNEXT – Paul Volcker, who tamed the Federal Reserve which was generating high inflation and stagflation in the US after the collapse of the Bretton Woods gold-peg system had died at the age of 92, US media reports said.

The US Federal Reserve was generating high levels of inflation in the US with a floating exchange rate, after money printing under Arthur Burns led to the collapse of the US dollar and the Bretton Woods system.

Burns was trying to close an output gap by loosening monetary policy at the behest of President Richard Nixon.

Volcker took over in 1979, after a short stint by William Miller both of whom were appointed by President Carter.

Volcker, as a Treasury official in charge of monetary policy was also involved in the break of up the Bretton Woods, which came in the form of President Nixon ‘closing the gold window’ and imposing trade controls (Nixon shock).

Gold, commodity and energy prices soared as the Fed’s monetary policy went out of control. 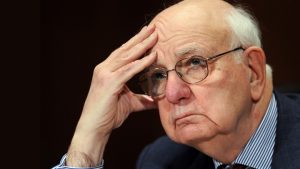 Volcker halted so-called ‘full employment’ policies that had brought high inflation and the breaking of the dollar’s peg to gold, by raising policy rates to nearly 20 percent.

He killed double digit inflation in the US (and dollar pegged nations around the world), at the cost of a short recession, during President Ronald Reagan’s term of office and found a way to tame the negative effects of a floating exchange rate.

Around the same time, Britain’s Margaret Thatcher, advised by Alan Walters, as well as the Bank of England followed tight policies to kill inflation and pave the way for a strong period of growth.

The Fed did not do major damage to the world until the 2008, when excessively low interest rates in the preceding years (the mother of all liquidity bubbles) generated a massive housing, oil and commodity bubble, leading to bank runs and collapses of insurance firms. (Colombo/Dec09/2019)