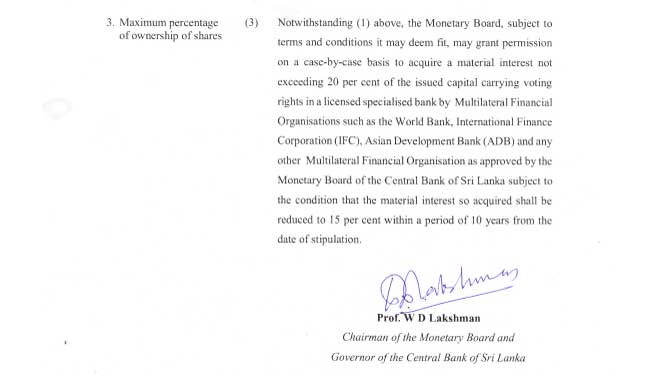 ECONOMYNEXT – Sri Lanka’s central bank said it will allow multilateral agencies such as the International Finance Corporation, the Asian Development Bank or other approved bodies to buy up to 20 percent of a licensed commercial bank in Sri Lanka.

At the moment, a shareholder or a group of affiliated shareholder are allowed to own a maximum of 15 percent of a bank.

Several firms and banks have larger stakes purchased through special permission, which they have to exit.

The central bank’s Monetary Board said it allowed multilateral agencies to buy up to 20 percent in a commercial bank “having considered the benefits to the banking system through the investments by Multilateral Financial Organisations in the shareholding of licensed commercial banks…”.

The investor will have to reduce its stake to 15 percent after 10 years.

Sri Lanka’s banks are seeing higher levels of bad debts following a Coronavirus crisis and an earlier debt moratorium as well as a currency crisis in 2018.