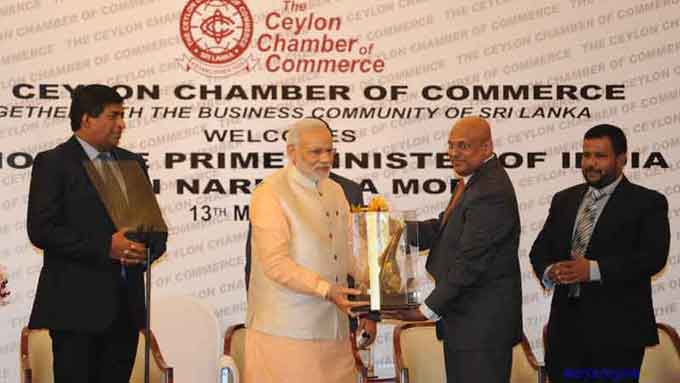 COLOMBO (EconomyNext) – The head of Sri Lanka’s top corporate chamber Friday called on India and Sri Lanka to set up a mechanism to resolves business disputes between them to enable greater economic integration.

"They are mutual recognition of standards, non-tariff barriers and testing procedures," he told a business forum in Colombo attended by visiting Indian Prime Minister Narendra Modi.

"It is our hope that these issues are put to rest fast– and we call upon both governments to set up a high powered dispute resolution mechanism to do so – so that the more important issues pertaining to deeper economic ties between our two countries can be addressed."

Modi arrived in Sri Lanka Friday on a two-day visit on the last leg of his Indian Ocean tour.

Shah said the Ceylon Chamber has ‘consistently" supported deeper economic ties between the two countries, having given its fullest support to the Indo-Lanka free trade deal.

"Subsequently, we have argued in favor of the principle of a comprehensive economic partnership agreement – commonly called CEPA – subject of course to the fine print," he said.

CEPA has been on the backburner in Sri Lanka, Shah said.

"This is partly due to politics and partly due to concerns on the part of some sections of Sri Lanka’s business community who perceive a playing field tilted in favor of their Indian counterparts," he said.

"The complex regulatory environment in India may have contributed to the latter concern."

Shah said three factors have kept deeper economic ties between Sri Lanka and India as a concept rather than as a policy.

"Political will, concern amongst the business community – both of which refer to Sri Lanka – and the regulatory framework within India.

"Hopefully, the political will on the Sri Lankan side is far more positive now," Shah said, referring to the new government which has sought better ties with India.

Shah said he hopes that under Modi’s leadership, "the Indian regulatory environment will soon meet the needs of modern day trade, commerce and investment."

The third constraint is anxiety over the asymmetric relationship between the two countries, India being 60 times larger than Sri Lanka in terms of population and 24 times larger in terms of its economy.

"Thus Sri Lankan businesses cannot hope to derive the economies of scale that their Indian counterparts are born to," Shah noted.

"Under the circumstances, the concerns of some sections of the Sri Lankan business community are not unfounded.

"An asymmetric mechanism that recognizes Sri Lanka’s inherent scale disadvantages will go a long way to ease the concerns of the business community in this country."