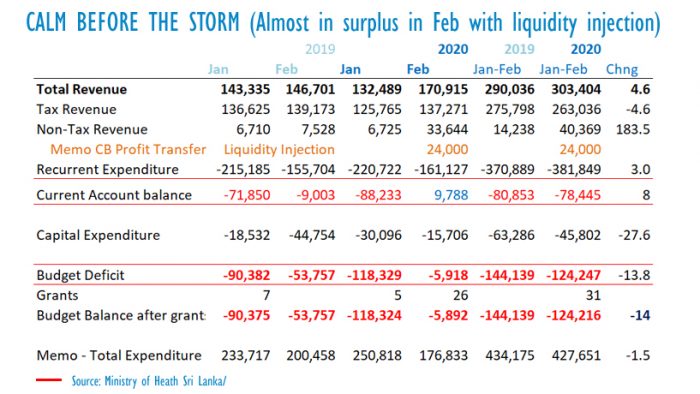 ECONOMYNEXT – Sri Lanka’s budget deficit for the month of February 2020 was almost in balance and the current account was in surplus with a 24 billion rupee central bank profit transfer which came as a liquidity injection, official data shows shortly before the rupee came under severe pressure.

The current account of the budget was in surplus by 9.7 billion rupees in February 2020.

However the surplus came from the jump in non-tax revenues with a 24 billion rupee profit transfer, which was given to the Treasury as a liquidity injection, has the same effect as central bank credit (printed money) or central bank re-finance.

When the Treasury spends the money, the rupee peg can come under pressure unless reserves are used to prevent the peg from breaking.

Analysts have therefore advised that no profit transfer be made for the next few years, and if they are done to make the transfer in forex reserves from the beginning, so that the reserve money is not disturbed.

The profit transfer was the first of a series of helicopter drop style liquidity injections made by the central bank to trigger the current phase of monetary instability.

Sri Lanka’s Mercantilists have spread an idea that budget deficits cause inflation and currency pressure from ‘excess demand.’

However classical economists have pointed out that a budget deficit per se cannot cause excess demand unless it is financed by the central bank with printed money, or open market operations or a reduction in statutory reserves.

Whether a deficit – or private credit – causes currency depreciation depends on how it is financed, not the deficit itself, in same way that shortages and inflation occur in wartime because spending is financed by printing money.

Domestically financed deficits from actual savings of the public simply lead to higher local interests and crowding out of the private sector.

“No additions to the money supply take place when the savings of the people are claimed by the government to finance its outlays; such operations merely shift moneys from the pockets of the savers into the pockets of the recipients of government disbursements,” explained classical economist B R Shenoy in a 1966 a reform program produced for the then Ceylon government.

When money is printed through bond purchases by the central bank or provisional advances, or commercial bank borrowings are re-financed with central bank windows, excess demand is injected which will spill over to the balance of payments.

The sales to or purchase by,”the Central Bank of Treasury Bills and other Public Debt, either directly from the Government of via the market” will generate new money.

Shenoy pointed out that if the central bank buys bonds using central bank resources or debiting is required reserves, new demand would also be injected.

“The same and result emerges when Public Debt is sold to commercial banks,” he said. “The latter pay for them in Central Bank money held in their reserves and deficit financing, then, causes the issue of such money into circulation.”

Sri Lanka cut the reserve ratio by 1 percent releasing over 50 billion rupees to money markets in March, despite having a peg and despite global financial market uncertainty. It was not a temporary drawdown as envisaged by Shenoy but a permanent injection.

In February 2020 Sri Lanka is in an unusual position of recording a current budget surplus with central bank liquidity before the rupee was let go.

The central bank has since announced another 50 billion rupee quasi-fiscal Coronavirus re-finance facility in the same lines as the Reserve Bank of Zimbabwe’s Productive Sector Facility (PSF) and Agricultural Sector Enhancement Facility (ASPEF) about 15 years ago. (Colombo/Mar30/2020)