Sri Lanka GDP to grow 3.7-pct in 2020, with limited hit from Coronavirus: IMF ECONOMYNEXT – Sri Lanka’s gross domestic product growth is expected to increase to 3.7 percent in 2020, with a limited fallout from the Novel Coronanvirus expected, the International Monetary Fund said.

Sri Lanka’ economic growth was estimated to have slowed to 2.6 percent in 2019, in the aftermath of a currency collapse in 2018 and East Sunday attacks in April which hit tourism.

“The recovery is supported by a solid performance of the manufacturing sector and a rebound in tourism and related services in the second half of the year,” IMF Mission Chief Manuela Goretti said in a statement after ending a visit to the island on February 07.

“High frequency indicators continue to improve and growth is projected to rebound to 3.7 percent in 2020, on the back of the recovery in tourism, and assuming that the Novel Coronavirus will have only limited negative effect on tourism arrivals and other economic activities.”

Sri Lanka has sharply cut taxes after a new administration was elected in November 2020, reversing a so-called ‘revenue based fiscal consolidation’ which not only raised value added tax, but also direct taxes, which reduces investible capital, future growth and jobs.

The tax, cuts however is expected to widen the deficit to 7.9 percent of GDP in 2020, the IMF has projected, with not just direct taxes being cut, but also value added tax.

There were also payment arrears from 2019, the IMF said.

“Given risks to debt sustainability and large refinancing needs over the medium term, renewed efforts to advance fiscal consolidation will be essential for macroeconomic stability,” Goretti said.

“Measures to improve efficiency in the public administration and strengthen revenue mobilization can help reduce the high public debt, while preserving space for critical social and investment needs.”

Sri Lanka’s highly unstable soft-peg, a chronic source of monetary instability for 70 years, collapsed in 2018 in the wake of rate cuts and liquidity injections as the credit system recovered from an earlier crisis analysts have said. 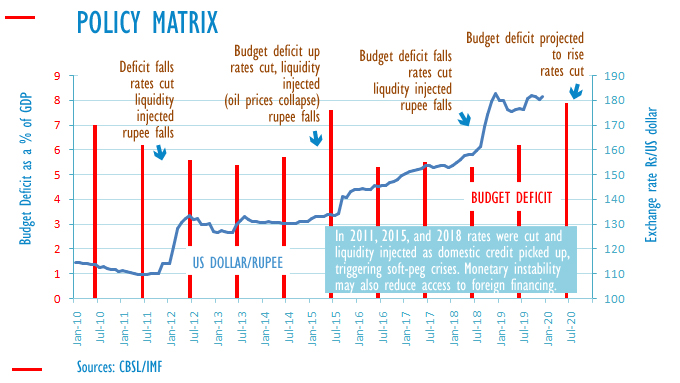 The corrective measures led to a credit contraction, which in turn drove a import contraction and overall slowdown.

Amid the threat of a higher deficit, the central bank cut rates on January 30 adding monetary measures to a fiscal stimulus.

In the past, liquidity injections made to enforce rate cuts, with or without increases in budget deficits, have led to renewed monetary instability, currency collapses, reserve losses and slow growth.

“The CBSL should continue to follow a prudent and data-dependent monetary policy and stand ready to adjust rates to evolving macroeconomic conditions,” Goretti said.

“Net International Reserves fell short of the end-December target under the EFF-supported program in 2019 by about $100 million amid market pressures after the Presidential elections and announced tax cuts.”

Sri Lanka has missed both deficit and forex reserve targets for December in a three year IMF program which is drawing to a close.

Reserves had fallen a slightly in January 2020, data showed.

“Concerted initiatives are needed to foster the business climate, promote trade openness and investment, and strengthen infrastructure sustainably, including to respond to the challenges from climate change. Sri Lanka stands to gain from greater female labor participation.” (Colombo/Feb10/2020)