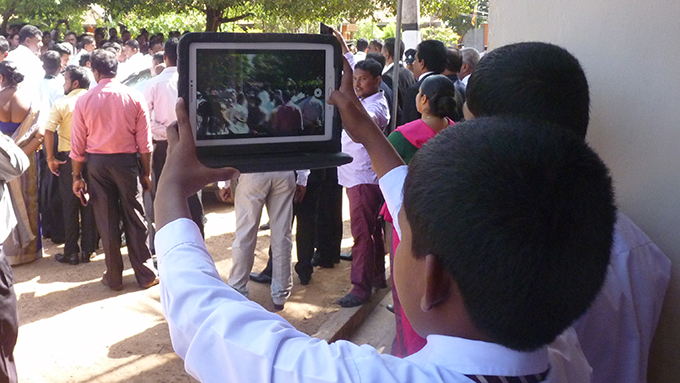 ECONOMYNEXT – Sri Lanka will bring modern technology transforming education over the next decade, Prime Minister Ranil Wickremesinghe said at the opening of a hi-tec ‘smart classroom’ at one of the country’s oldest western-style schools.

Wickremesinghe visited the model classroom with students equipped with tablets and wi-fi connections at Sri Jayawardenepura Maha Vidyalalaya in Kotte, in an initiative started by Deputy Minister Harsha de Silva, who represents the area in parliament.

"This is a pilot project," Prime Minister told a gathering outside the classroom. "It brings cloud technology, tablet devices to the classroom."

"We want to roll this out to the education system over the next decade. We also want to give similar technology to vocational education."

Deputy Minister Harsha de Silva says the teachers of the classroom were trained in Australia.

The school was started in 1820-22 originally as a place to teach Anglican priests.

The school’s students went to higher studies in India where the first Western-style University was set up. Governor Maitland had helped two students from the Obeysekera family to go to Oxford University, he said.

In 1834 the then British Governor Wilmot Horten had visited the school and next year he had helped start the Colombo Academy as a public school, which later became the Royal College.

Prime Minister Wickremesinghe said students of the school were able to learn, English, Latin and Greek, geography and British history.

The Kotte school had originated as an informal class at the bungalow of the veranda of an Anglican priest It was then known as the Veranda school. It was later called the Christian College.

The turnoff to the Mission Road in Kotte is still known as ‘Bangala Handiya’.

Among its well know students who got a western education was Don Hewavitharana who came to be known as Anagarika Dharmapala.

Though the building that housed the Veranda School has been demolished the first formal school building named after the first principal Rev. Samuel Lambrick is still standing.

A girl’s school was also set up later as well as hostels with it becoming a boarding school.

Ramya Wickramasinghe, an old boy of the school, says it its heyday the school was reputed beyond Sri Lanka’s shores, and attracted foreign students from foreign countries in the Indian subcontinent and the Maldives.

However after it was nationalised in 1964 the school had entered into a period of decline, and became less well-known, he said.

However now the school has an energetic principle and staff, he said. With the smart classroom the school is continuing the pioneering spirit. (Colombo/Sept29/2017)