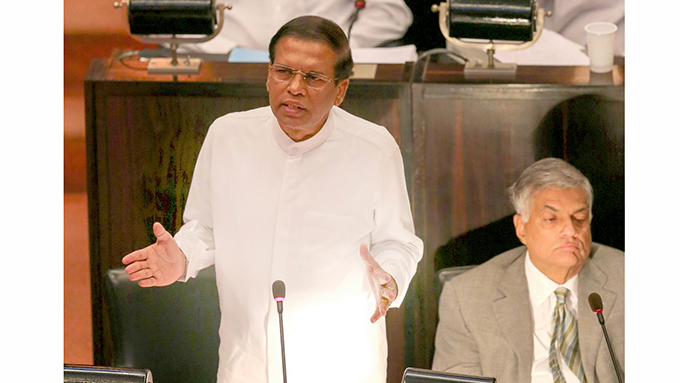 ECONOMYNEXT – President Maithripala Sirisena, who is at loggerheads with Prime Minister Ranil Wickremesinghe’s United National Party (UNP), has strongly hinted at a possible split of their coalition mid-way of its five-year term.

The President told his Sri Lanka Freedom Party (SLFP) loyalists that he has decided to carry out the "second stage" of his daring political bravery of defecting  from the then strongman president Mahinda Rajapaksa’s government in November 2014.

A rank outsider, Sirisena quit his Health ministry portfolio and challenged his former boss at the snap presidential election of January 2015. He won spectacularly with the support of a UNP-led rainbow coalition clamouring for good governance after a decade of autocratic rule.

On Friday evening, Sirisena said the way to save the country from the scourge of bribery and corruption was to strengthen his SLFP which he described as the only "clean political force in the country."

"Without strengthening the SLFP, I don’t see any clean political force that could save the country at this time in its history….

"As I took a courageous and bold decision to leave the (then) government on November 21, 2014, I have today decided to take my next major step. It will be in the interest of the country and its people to ensure a clean political force," he said.

He said he did not fear consequences of his impending action out of his love for the country and its people.

"Whatever happens to me, I will do it. Otherwise we cannot save this country. Someone has to do this. The person who is doing it will have the support of  lakhs of people," he added without specifying what his action will be.

His comments come ahead of the February 10 local council elections at which his SLFP will take on Prime Minister Wickremesinghe’s UNP as well as the Sri Lanka Podujana Party (SLPP) loyal to Rajapaksas.

Last month, President Sirisena suggested that Wickremesinghe’s government could be more corrupt than the previous regime.

He said the Rajapaksa was responsible for several mistakes, but the UNP-dominated government was no better.

"The SLFP made some mistake, but if the UNP is also making the same mistakes, and even exceeding (the corruption) of the SLFP regime, the people will not approve it.

"If there is any allegation against me, I am willing to give up all my posts and join the battle against corruption," he said amid applause at a public meeting in Nikaweratiya in November.

However, the UNP pointed out that Sirisena had since been in contact with Basil Rajapaksa, the then Economic Development minister under his president brother, and had been seeking rapprochement with SLFP dissidents in a bid to beat the UNP at the February local elections. Basil Rajapaksa had been accused of being a symbol of the Rajapaksa-ear corruption and is currently facing prosecution over his allegedly ill-gotten wealth. He has denied any wrongdoing.

The UNP is also blaming Sirisena for blocking the arrest of former defence secretary Gotabhaya Rajapaksa who is a person of interest in several high profile murder investigations and massive scale corruption.

However, President Sirisena has denied he was interfering with investigations.

He said his appointment of a commission to investigate controversial bond purchases under the current government was applauded by both Sri Lankans in the country and abroad.

After he was provided with a full report at the end of this year, he will appoint another commission to investigate state-owned Sri Lankan airlines and Mihin air, he added. The current board of Sri Lankan airlines, appointed by Wickremesinghe, has been accused of mismanagement and corruption and several ministers have already called for a clean-up of the airline’s top management. (COLOMBO, December 23, 2017)