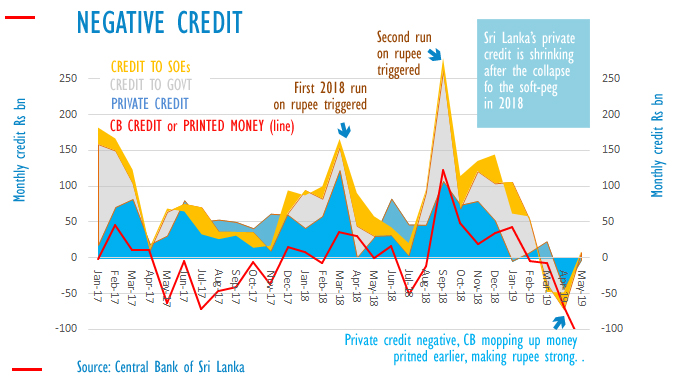 ECONOMYEXT – Sri Lanka’s credit to private borrowers contracted 2.5 billion rupees in May to 5,541.8 billion rupees, after a 43.4 billion rupee contraction in April, which coincided with a settlement of a payment arrears to contractors by the state.

Central bank credit to the government (the outstanding stock of printed money) fell 118.9 billion rupees in May as excess liquidity was mopped up as extra cash issued to meet April festival needs came back into the banking system.

In Sri Lanka the excess cash injections tends to pressure the rupee peg with the US dollar when credit demand is strong, unless that cash is withdrawn quickly.

In 2018, analysts pointed that the central triggered a run on the rupee by injecting large volumes of excess liquidity in to the banking system in April in excess of a real demand for money in the festival period.

However monetary policy was more cautious this year. Despite weak credit data showed that the central bank had to sell 40 million US dollars in April to maintain the rupee peg, though 45 million dollars was also bought.

So far in 2018 central bank credit to government had fallen 155 billion rupees despite a foreign reserve appropriation in January, as term reverse repo injections which helped triggered monetary instability was terminated.

Private credit in the first five months of 2019 had contracted 29 billion rupees, a reversal from a growth 251 billion rupees in 2018.

Sri Lanka’s central bank printed money in 2018 as the credit system to recovered to target inflation and close an econometric output gap, making the rupee fall from 153 to the 182 to the US dollar and generating monetary instability to kill the recovery, analysts have pointed out. (Colombo/July15/2019)

There have been calls to the central bank to stop targeting two anchors (external by defending a peg to collect forex reserves) and printing money to push inflation up in the style of a non-existent floating rate, which are contradictory and generates a collapse of the peg. (Colombo/July14/20190