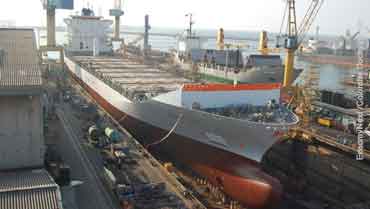 Earnings per share for the quarter were 2.43 rupees, a stock exchange filing said.

Sales fell 16 percent to four billion rupees in the quarter from a year ago while cost of sales rose 20 percent, the yard, a unit of Japan’s Onomichi Dockyard Company, said.

Interim accounts filed with the stock exchange showed ship repair profits improved only marginally to 782 million rupees from 719 million rupees during the December 2014 quarter from the year before.

Ship owners are putting off orders for new vessels and delaying repairs because their earnings have been reduced by the prolonged slump in shipping caused by an oversupply of tonnage and low freight rates.