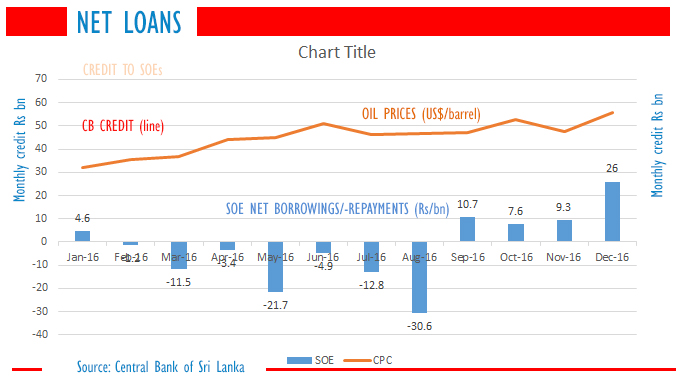 "We are a human government," Finance Minister Ravi Karunanayake told reporters last week. "We are not putting the burden on you, we are taking it ourselves."

He said state-run Ceylon Petroleum Corporation was ‘not necessarily’ running a loss in a ‘holistic’ picture’ as petroleum products were taxed at source.

Oil prices plunged to around 31 dollar in January 2016, giving large profits to Ceylon Petroleum Corporation, but has since climbed. By June Brent Benchmark crude had risen to over 47 dollars.

By December Brent was at 53 dollars. According to Central Bank data average crude import prices of CPC had gone to 55.69 dollars in December from 31.87 dollars in January.

Karunanayake said oil with oil around 55 dollars, it was difficult but not out of reach.

Both propane and butane prices have risen sharply. Butane rose from 370 dollars a metric tonne if October 2016 to 600 dollars in February 2017.

Privately owned Laugfs Gas said it was seeking a price increase from the government, as the group reported losses in the December 2016 quarter, which analysts say indicates that state-run Litro Gas is also in the red.

A drought has also forced Ceylon Electricity Board to ramp up thermal power, which also requires more oil imports.

Funding SOE losses with bank credit and ‘taking on the burden’ had been a recipe for economic instability and balance of payments troubles in the past.

Sri Lanka was expected to have a price formula for fuel by December 2016 but it has not happened. A price formula for LP gas which operated under the last administration has also been discontinued. (Colombo/Feb21/2017)