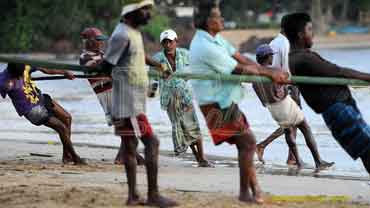 "Fish consumption in Sri Lanka is inadequate. Sales of fish have dropped and that’s also a reason for under-nutrition," said Minister of Fisheries Mahinda Amaraweera, noting that alternatives like chicken may be cheaper.

The country is lagging behind in nutritional indicators with one in five children in Sri Lanka undernourished.

The United Nations recently said Sri Lanka has done well in improving social indicators and meeting most of the Millennium Development Goals but lack of nutrition among children remains a serious concern.

The nutrition levels were worse in remote areas and the island’s estate sector, and nutritional indicators have stagnated for the last 15 years, the UN report said.

Amaraweera said there was a big gap between fish wholesale and retail prices, with middlemen keeping high profit margins which he aims to reduce.

"Our target is to increase per capita fish consumption to 60 grammes a day from 42 grammes today."