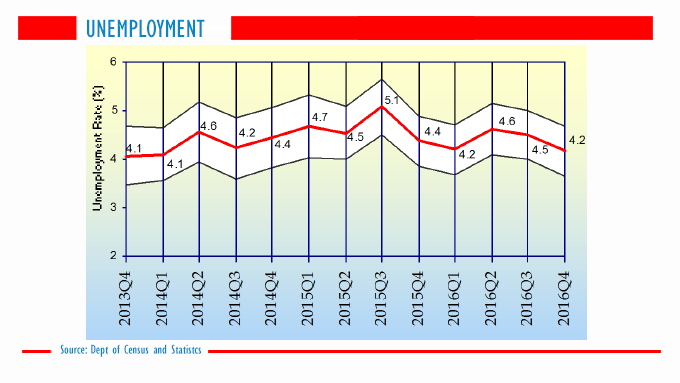 Most of the jobs were created in the services and industrial sectors, while the agriculture sector was flat amid a drought.

However for long term prosperity people have to move out of agriculture into industry and service, pushing up mechanization and labour productivity in agriculture.

The Department of Census and Statistics said the changes were not statistically significant.

The total employed population rose to 8.006 million in the fourth quarter of 2016 from 7.928 million a year earlier and was marginally up from 7.998 million in the third quarter.

Quarter-on-quarter data are not comparable partly due to seasonality of agriculture.

However this year Sri Lanka has is feeling the lagging effects of last year’s drought.

An unemployment rate of 4.1 percent is the lowest seen since the fourth quarter of 2014.

Due to currency depreciation, large number of workers seek jobs in the Middle East where returns to labour are higher and strong exchange rates have preserved capital allowing for investment.