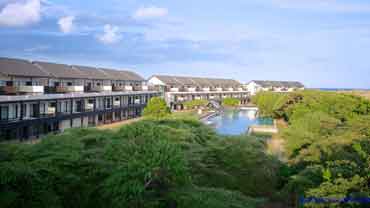 EconomyNext – Sri Lankan hotels are generally more expensive than competitors in the region with other Asian destinations offering better ‘value-for-money’, according to a report on the tourism industry.

“In comparison to other regional countries, Sri Lanka is generally on the higher end of the spectrum,” Bartleet Religare Securities (BRS) said in a report.

The present shortage in supply helps hoteliers demand a higher price for accommodation.

Higher energy and construction costs and higher import duties on food items compared to regional peers also contribute to the higher overall prices in the island, the report said.

“Even for the domestic tourist segment, travelling abroad to a regional country proves to bring in more ‘value-for-money’ when taking into account intangible benefits such as the experience of air travel and different cultures.”

BRS said that a seven-day trip offered to tourists on three star accommodations would cost about 400 US dollars more than the trips offered by countries such as Malaysia and Thailand.

“Sri Lanka aligns towards the high end of the sample,” the brokerage said. “We see the lack of supply as a key factor in promoting higher prices.”
(Colombo/July 20, 2015)