ECONOMYNEXT – Sri Lanka’s small businesses say they are finding it difficult to get credit to tide them over a cashflow crunch from a Coronavirus lockdown through subsidized schemes where credit risk is mostly taken by banks and depositors.

On June 16 the central bank cut its reserve ratio by 200 basis points to 2 percent in the latest loosening of policy and injected liquidity allowing more money from deposits to be loan and also announced re-financing schemes with new money running up to 150 billion rupees.

Except for a newly announced scheme for contractors backed by a government guarantee the credit risk has to be taken by banks and their depositors, which makes banks look to the creditworthiness of borrowers before lending.

The government first announced the credit scheme in April where the Central Bank would give newly created money to at 1% for onward lending to vulnerable businesses at 4 percent.

The central bank said on June 16, that 27.5 billion rupees in loans been approved under the first 50 billion rupee scheme.

The government ordered the central bank to extend the scheme to 150 billion rupees.

Sri Lanka locked down its economy for nearly two months to contain the spread of the pandemic, but businesses came to a standstill.

Sri Lanka’s COVID-19 relief allocation pales in comparison to its regional peers, according to Publicfinance.lk, a portal developed by Verite Research, a think tank.

The island’s relief allocation which includes cash disbursements to households is estimated at less than 0.5 percent of GDP (compared to India 10%, Thailand 9.6%, Vietnam 3.5% and the Philippines 3.1%).

Sri Lanka government debt as a percentage of gross domestic is also the highest amongst these counties at 89% (India 72%, Vietnam 43%, Thailand 10% and the Philippines 39%). 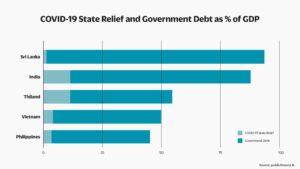 Sri Lanka, however, has put the burden of credit relief on banks and new money creation with no fiscal or credit risk support.

High debt levels of the government may be the reason.

“Long periods of putting off tough (fiscal) reforms has come to haunt us because now we don’t have the fiscal space to deal with the economic challenges caused by the pandemic,” said Anushka Wijesinha, an economist and an independent director at a bank addressing a recent webinar hosted by the Ceylon Chamber of Commerce.

According to the Ceylon Chamber of Commerce, Sri Lanka requires an economic relief package of about 2.5 – 3 percent of GDP.

Sri Lanka Exporters Association President Rehan Lakhany told EconomyNext that loan applications of many of SME members had been rejected by banks.

“It was announced that hotels and travel agencies would get five-year loans at 4 percent to pay up to 20,000 rupees per month per employee for up to six months,” Guneratne said.

“Restaurants, spas and wellness businesses have been offered the same terms but for 15,000 rupees a month per worker. So far, accessing the credit has been difficult.

“When we approach banks, we’re greeted with red-tape. They ask for collateral although the government never mentioned this when it announced the scheme.

“Now that the government has given the nod for this, we hope they will ensure disbursement as-soon-as-possible because people have been out of work for two to three months. People have not got paid and the impact on their families is worrying”.

Some businesses were even told by banks that the Central Bank had declined their loan applications, said Hemantha Perera, Secretary-General of the Sri Lanka Chamber of Garment Exporters.

“This is despite providing all the documentation banks have requested,” he said. “We were also taken by surprise when banks insisted on collateral; this requirement was not announced earlier.”

The key problem with the credit schemes already announced the risk of default loans falls fully on banks and their depositors.

At the moment except for a new scheme announced for contractors of government schemes on June 16, which is to be backed by a government guarantee on contracts given, the entire credit risk is taken by banks and their depositors.

A partial of full credit guarantee will make it easier for banks to lend not just re-finance money, but its own funds.

“The Central Bank is giving loans at 1% to banks for onward lending at 4 percent,” De Mel said.  But what is happening is that banks are lending to businesses that are most likely to pay back the loans. This is because the entire risk of default is on banks.

“The Central Bank may reduce the margin for banks, for the refinance scheme to be effective it must also share the risk,” he said.

Bad loans at Sri Lanka’s banks had risen to 4.7 percent by end December 2019, a six-year high.

The central bank has lowered capital requirements and the government had also cut taxes, which will help.

“I advocate a credit guarantee scheme where the risk is shared between the government, lending institutions and perhaps maybe development finance institutions,” he said.

There have been instances in the past where the government has given a 75 percent credit guarantee, he said.

“This is important because it improves the financial sector’s appetite for new lending and ensures vulnerable businesses get relief quickly and effectively.

“Banks cannot be the de-facto relief arm of the state because they are responsible for depositors’ money and are required to follow their prudential guidelines so anything to grease the system like a credit guarantee scheme would help,” Wijesinha said.

As a country with a chronic balance of payments problem and a depreciating soft-pegged exchange rate, there is no widespread knowledge in Sri Lanka that new money created by the central bank triggers foreign exchange shortages, unlike in countries where central banks operate floating exchange rates or international currencies.

“I think many Asian countries will be forced if the situation becomes aggravated first to use large stimulus packages despite their limited policy space and despite that, they do not have international currencies,” IMF’s Asia Pacific Chief Changyong Rhee, Director, Asia and Pacific Department, IMF said in April.

“So, when they actually rely on large stimulus packages, they have to worry about its possible negative impact on their external sector especially the FX market.

By using credit guarantees, either from the government or the central bank, balance of payments trouble and the risk of sovereign default from forex shortages could be reduced.

“For emerging markets with limited fiscal space, they might need to consider how to use central bank balance sheets flexibly to help small and medium enterprises through risk-sharing with the government,” Rhee said.

Some small businesses are also struggling with administration and logistics problems.

“Most SMEs are outside commercial centres and too far away from banks,” he said. “They couldn’t apply for the refinance scheme because of the lockdowns and now banks tell them the deadline has passed,”

Some also do not have credit relationships with banks.

“I believe there are half a million unregistered businesses in rural areas that provide employment opportunities which means no relief is reaching them,” Rajabdeen said.

The government estimates that SMEs contribute about 45 percent to Sri Lanka’s economic output and generate jobs for nearly half the workforce, making the sector vital for the economy and jobs.

Sri Lanka’s economy is expected to contract this year for the first time since 2001 according to some forecasts. (COLOMBO, June 16, 2020)