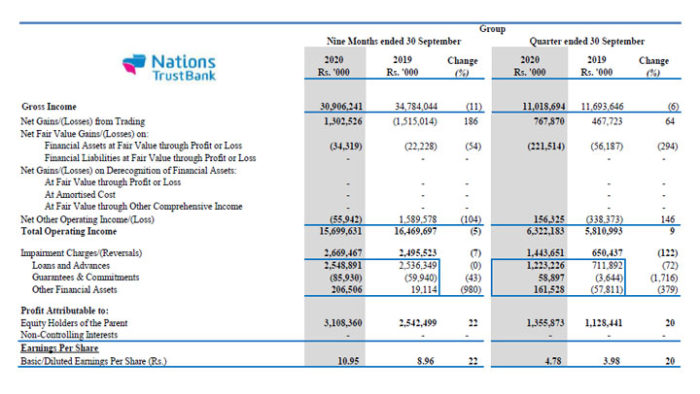 Loans fell 5 percent to 214 billion rupees from December to September.

Non-performing loan ratio went up to 7.18 percent in September from 6.17 percent in December 2019.

“In line with constrained operating conditions due to the restriction in movement which also hampered
collections to an extent, the non-performing loans ratio of the Bank increased..,” NTB said.

“The Bank also made additional provisions on impairment for identified customer segments on possible cash flow delays based on available information and on relief packages offered in the form of debt moratoriums.”

“In line with reduced business volumes due to the disruption caused by the COVID-19 pandemic and the
waiver of fees and charges, the fee based income dropped by 18 percent,” NTB said.

“Cards income resulted in the highest drop of 26 percent with the drop in card spend due to changes in customer spending pattern owing to the pandemic.

“The restrictions on non-essential imports and an overall decline in exports caused a 7 percent drop
in the trade fee.”