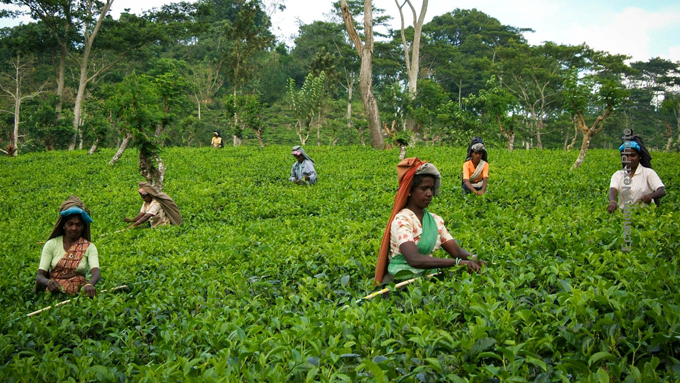 ECONOMYNEXT- Sri Lanka’s publicly traded plantations companies, growing commercial crops such as tea, which have been asked by the government to pay higher wages to workers have lost 2.6 billion rupees in the six months to September amid erratic weather and low commodity prices.

The plantations represented by the Planters Association of Ceylon are now negotiating with the government on how to pay a wage floor of 1,000 rupees a day mandated by the cabinet of ministers.

Government spokesmen have said a wage supplement from the Treasury or some other support may come. The plantations were privatized in the mid-1990s, after running large losses and the Treasury was forking out 400 million rupees a month to pay wages.

Despite the losses, plantation stock prices have risen 3.4 percent from end-March to end-December, although the entire stock market had risen 10.3 percent during the same period with elections and a general rise in business confidence.

Companies that produce tea, which is most labour intensive, usually suffer bigger losses than firms that have more rubber and oil palm. Oil palm is tax protected and tends to draw higher prices and is also less labour intensive.

Excessive rains have pushed up operating costs in 2019.

“It has been a challenging year for all tea producers,” Planters’ Association of Ceylon Spokesperson Roshan Rajadurai told EconomyNext.

“Plantations were severely impacted by unfavorable weather. Excess rain brought with it additional costs like more chemicals to fight fungal growth, weeds and other problems like soil erosion.

“This condition made plucking harder since workers couldn’t pluck if the ground was too wet.”

Costs have meanwhile also been escalating amid constantly rising wages over the past decade.

Wages were last revised in 2019, when the wages were set at 700 rupees a day with a 50 rupee price supplement, increasing from 500 rupees, which had collectively increased costs by 9 billion rupees for all regional plantations companies.

However, the current government has forced a wage high a year earlier, after ordering the planters to hike the minimum wage to 1,000 rupees by March 01.

Research at the Institute of Policy Studies, a leading think tank, shows that under the 2019 wage agreement, plantation workers are paid 3,055 rupees below a ‘living wage’.

A living wage is defined as the ability to procure basic nutrition, water, housing, education, healthcare, and transportation.

Plantations workers usually reside inside an estate are given some additional facilities.

Rajadurei said there is a need to move from the current attendance-based model, in which workers are paid for attending 25 days even if they do not work a full day, to a productivity-based model.

Other countries have already transitioned into productivity based models which gives better incentive to workers and boost productivity, he said.

“The bottom-line is, ours is an industry which is highly regulated on labour but we do not receive a compensating output from our labour force,” Rajadurai said.

“However, at the end of the day, producers remain unsatisfied as we are only price takers and have no other option but to sell at the auction price.”

Under longstanding rules Sri Lanka tea farms have to put up their produce for auction preventing the development of regional brands, some sector analysts have said.

In Sri Lanka workers pluck 16-18 kilogram’s a day, and if they pluck over 18 kilogrammes they are paid an ‘over-kilo’ rate to reward productivity.

Meanwhile in Kenya and India, pluckers average 36-60 kilogrammes a day, and get paid an over kilo rate for plucking above 24-40 kilogrammes.

Critics have blamed plantations for not innovating on production techniques to lower costs as well as downstream supply chains to boost revenue.

In Sri Lanka the rupee price may pick up due to currency depreciation. In 2018 the rupee fell from 153 to 182 to the US dollar amid liquidity injections.

A weak dollar tends to push up prices of commodities while tighter policy which contracts credit tends to push down commodity prices measured in nominal currency, analysts say.

Rajadurei said buyers at the tea auction were not offering good prices for tea leaves, although the buyers were getting premium prices at the world market for their brands.

“We have to deal with the risks of climate change and rising wages, but we are price takers at the auction,” he said.

Tea Board Chairman Jayampathy Molligoda said it is “an integrated productivity and quality problem.”

“We have noticed a gradual decline in quality of the green leaf. The good leaf count, which has come down, needs to increase subsequently.”

Auction prices fall if the plucked leaves are of lower quality.

“If the quality of raw material continues to deteriorate, we are in trouble,” Molligoda said.

Planters in Sri Lanka believe that the ‘Ceylon Tea’ brand would ensure survival of the industry.

However, traditional tea brewing is facing severe competition globally with blended ready-to-drink beverages such as iced-tea and drinks with tea extracts gaining popularity.

Molligoda said Sri Lanka’s planters cannot hold on to a belief that the Ceylon Tea brand will continue to provide dividends.

“People are no longer interested in the country of origin as long as the quality of tea is maintained,” Molligoda said.

“It has come to a point where we have to ask all industry stakeholders to adhere to the parameters of raw material standards.”

“Regarding the price factor, yes there is some truth to the price taker mindset in the context of this commodity trap.”

“However, you cannot generalize because you do receive a higher price if the quality is maintained,” Molligoda said.

Kenya, which had overtaken Sri Lanka as the top tea exporter in the world with CTC (crush, tear, curl tea) is now attempting to break through into the orthodox black tea Sri Lanka is famous for.

Sri Lanka tea industry is now trying to prevent stakeholders from losing out through new plans and reforms maximizing quality and productivity in the product.

“The CTTA has given a roadmap and the Chamber has also contributed with plans, thereby we are hopeful for this new year to turn out better than the last,” Rajadurai said.