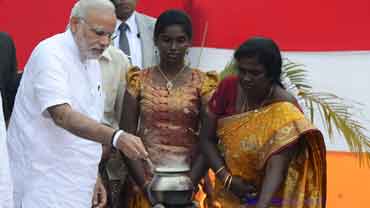 Some small countries in the Indian Ocean are trying to take advantage of the great power rivalry between China and India, Liu Zongyi, an academic in the Shanghai Institute for International Studies, an official Chinese research outfit, has noted.

New Delhi doesn’t want countries in South Asia and the Indian Ocean to participate in the program, but it is unable to propose a substitute, Liu wrote in an opinion piece in the Communist Party’s Global Times newspaper.

"Now that Modi has reached out to the Indian Ocean island states, it seems India is determined to gain a dominant position in the region by enhancing military and security cooperation with them," the article said.

Liu noted that historical disputes between India and Sri Lanka over the island’s Tamil minority and fishery resources will make it "difficult for the two sides to build a rapport any time soon."

It has also said it wants to rebalance its foreign policy and renew relations with India after the ousted Rajapaksa regime tilted towards China and strained ties with New Delhi.

Modi’s inclusion in his Sri Lanka trip the city of Jaffna in the Tamil-majority Northern Province, Liu asserted "shows India’s interference in the country’s internal affairs."

He then says that Sino-Lankan "friendship goes back a long way" and notes that Beijing provided military support to Sri Lanka in its war to defeat Tamil Tiger separatists when no one else did.

"And save for China, no other country was willing to help Colombo then," Liu asserted,

China’s support continued in the post-war period when it shielded Sri Lanka against Western and Indian pressure over alleged human rights abuses in its campaign against the Tamil Tigers, he added.

"While some states hampered Colombo’s efforts to resume domestic order under the excuse of human rights, Beijing again offered assistance for its post-war healing."

In what seems to be a veiled threat that such support would no longer be available
if Sri Lanka snubs China, Liu then says:

"If the Sri Lankan government ignores China’s goodwill in a bid to cater to certain powers, it will hardly gain respect from the international community."

Liu also adopts a conciliatory tone and makes suggestions in what appears to be a face saving way out for China to resolve its current differences with Sri Lanka, which is probing Chinese-funded projects for corruption and artificially inflated costs.

"Beijing should respect their (small countries’) attitude by further negotiating with countries along the (Maritime Silk Route) and discuss with them the rationality and feasibility of specific projects," Liu said.