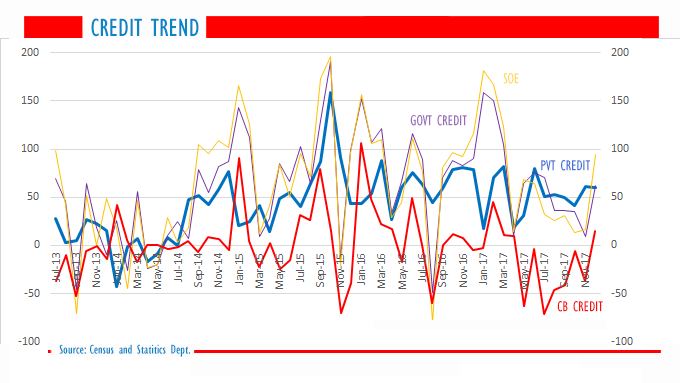 The central bank also injected about 15 billion rupees of reserves, with central bank credit (printed money) growing for the first time since June 2017 when a balance of payments crisis ended.

In December Sri Lanka’s monetary base expands as cash demand goes up for the festive season, and part of the expansion is met by dollar purchases of the central bank in years without a balance of payments crisis.

In 2017 private credit grew 14.7 percent or 650 billion rupees, down from 754.9 billion in 2016 with the central bank injecting 182 billion rupees on a net basis to boost credit to unsustainable levels, sterilizing interventions.

In 2017 the central bank withdrew 187.2 billion rupees from the banking system as it bought about 1.6 billion US dollars from forex markets.

But reserve money (the monetary base), also grew from 856.15 billion rupees to 939.79 billion rupees absorbing some of the cash generated from dollar purchases after the BOP crisis ended.

In December credit to state enterprises rose to 31.5 billion rupees from 7 billion rupees a month earlier. An official said expanded bank borrowings by the Road Development Authority and Water Board drove growth. (Colommbo/Feb27/2018)