ECONOMYNEXT- Sri Lanka’s tourism industry is bracing for the worst winter season in 11 years, with lower numbers of tourists, who are mostly budget conscious, after the Easter Sunday terrorist attack.

Arrivals have recovered from a drop of 70% in May to 22.5% by October, but it does not fully reflect in revenues, especially for the larger hotels.

“Arrivals and occupancy are two different things,” Sanath Ukwatte, President of The Hotel Association of Sri Lanka, among whose members are the largest hotels in the island, told Echelon.

“Most tourists are going to the informal sector. Now, occupancy is around 40%, and in December, we are hopeful it will go up to 60% and will continue till next March.” 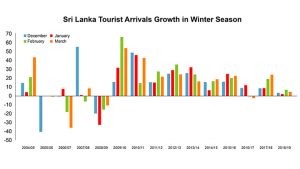 Ukwatte said even with an increase in occupancy, hoteliers are in for tough times, as rooms have been heavily discounted.

Hiran Cooray, ex-Chairman of the family-owned Jetwing Group, which is also one of Sri Lanka’s three largest hotel businesses said his budget brand Hotel J is witnessing normal occupancy. But luxury Jetwing branded hotels are witnessing a 30-40% drop in business.

“We are discounting till December for now, but we may have to continue that January onwards as well,” he said.

Former Sri Lanka Tourism Promotions Bureau Chairman Kishu Gomes said before his resignation that arrivals would be 20% in December from a year earlier when a record 253,169 holidaymakers arrived that month.

Sri Lanka last experienced an almost similar (19%) fall in arrivals in 2008, when the country was in the last stages of a 25-year civil war. In 2005 arrivals dropped 40%, when hostilities resumed after a ceasefire with the Tamil rebels.

As Europeans escape winter at homes running from December through to March, Sri Lanka has its most lucrative tourism season. In that period, Europe is the top generating market for the island.

December is usually Sri Lanka’s best month for tourism, with arrivals sometimes showing a 30-40% growth above the monthly average. Arrivals are around 10-20% higher during the rest of the season.

Since the end of the war in 2009, employment in the tourism industry had more than tripled to 169,000 by end-2018, while the national room capacity had more than doubled to cater to a five-fold increase in tourist arrivals.

Planning Horizon
Sri Lanka has arrested the decline from the worst 70.8% drop in May to a 22.5% fall in October with positive publicity from travel publications such as Lonely Planet, quick lifting of travel bans and hotels cutting prices by as much as 50-60%.

But organised groups and high-end travellers, who are usually older and who patronise luxury accommodation have yet to return in large numbers. Their planning horizon is much longer compared to spontaneous young travellers and backpackers, who are willing to take greater risks.

With lower arrivals, JKH’s leisure arm posted a Rs1.6 billion loss after tax during the first six months of 2019/20, compared to a Rs120.8 million profit a year earlier.

At Aitken Spence, another of the three largest, posted a Rs1 billion loss for its tourism and hotel business, compared to a Rs346 million loss a year earlier. This was despite the two giants having significant business abroad to cushion their numbers.

Following the April attacks, Sri Lanka’s hotel industry faced a sudden shock, unlike during the long-drawn civil war, when it had the space to deploy multiple strategies.

Some smaller hotels had laid off employees; especially trainees, part-time and casual workers, although larger hotels committed to maintain their staff as an investment for the future.

Ukwatte said some of the hospitality talent who left the industry had migrated, and there are fears that they may not return for a long time.

He said hotels have attempted to rationalise cost structures, with a favourite being reducing electricity consumption.

The government had also offered interest-free credit and a moratorium on existing loans and tax cuts. Ukwatte said similar to 2008 when war was raging, the hotel industry is receiving a lot of government help.

Other hotels have reduced expenses such as web development and maintenance, social media and search engine optimisations costs which are lucrative retainer business for software companies. Instead, these hotels are opting for basic in-house servicing until normalcy returns.

Ukwatte says the industry is expecting 2020 to be a boom-year, with the launch of international tourism campaigns. “We are expecting next winter to be a record,” he said.

This article was first published in the December 2019 issue of the Echelon Magazine. To read Echelon Magazine articles as soon as they are published, subscribe at this link. The i-tunes app can be downloaded from here.