Uproar over crowds at Thondaman’s funeral and Jeevan’s behaviour ECONOMYNEXT – There is an uproar over the way quarantine laws and the election law was flouted during the funeral of the late Minister Arumugam Thondaman which was held over the weekend.

Activists, health workers and election watchdogs raised many questions about the huge crowds allowed to congregate at the 5-day-long funeral proceedings.

Even though President’s Media Division issued a statement on Friday (May 29), enforcing quarantine curfew on Saturday in Nuwara Eliya district and an all-island curfew on Sunday, photos of the funeral circulated in social media showed large crowds gathered there without any social distancing as required by the health authorities.

On Saturday, the President of the Public Health Inspectors’ Union of Sri Lanka, Upul Rohana said that they are ready to take legal action against everyone responsible for organising the funeral if any attendees are infected by COVID-19 and results in a new cluster of patients.

Also, he said that a supporter of the late Minister Thondaman has threatened the Director-General of Health Services Dr Anil Jasinghe on the telephone regarding the organising of the funeral.

The PHI Union questions the authority of that person to disrupt the work of a public servant while going begging for votes in order to gain political power over the dead body of the Minister.

He added that these kinds of activities exhaust health officials including the medical health officers, public health officers and hospital staff who fight day and night against the COVID-19 Pandemic also present a bad example to the country.

The National Coordinator of Centre for Monitoring Election Violence (CMEV) Manjula Gajanayake pointed to the fact that Jeevan Thondaman, the late Minister’s son paraded through the streets during the funeral.

He said it is “regrettable that the election authorities remain silent when the candidate who has been proposed to contest for the forthcoming elections in place of late Minister Thondaman was parading in an open vehicle through a number of electorates in the hill country violating election laws and quarantine laws.”

Meanwhile, the Government Medical Officers’ Association (GMOA) in a statement warned about a possible second wave of COVID-19 in the country as large crowds were gathered to pay respect to the late Minister Thondaman

The statement also said that if everyone fails to understand the danger of this situation regardless of their status, the country could again fall into a dangerous situation.

Speaking to reporters this morning, former MP Nalin Bandara said that even though last respects should be paid to late Minister Thondaman who won the hearts of the plantation workers, the quarantine regulations should be same to all as there is a pandemic in the country.

“There cannot be one way when a soldier dies and another way when a farmer, politician or Buddhist monk dies,” he added.

Also, he said that the quarantine regulations were the same until the funeral of Late Minister Thondaman and said that the funeral was held for 5 days travelled to 5 or 6 places with large crowds in attendance.

Below are some of the posts and shared in Social Media (Facebook, Twitter) about funeral of the late Minister Arumugam Thondaman, 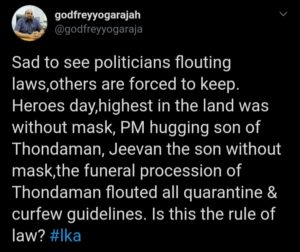