ECONOMYNEXT – Sri Lanka’s power engineers and electrical superintendents have kept the nation supplied with power so far with great difficulty amid a strike called by non-technical staff for higher salaries.

A striker breaker said they have reported to work despite threats and mud-slinging campaigns.

"We can keep the generation side going, but the problem is with distribution," a senior Ceylon Electricity Board official said. 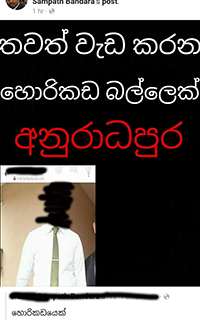 "When breakdowns happen it is difficult to restore supply without other staff."

There have also been reports of sabotage of transmission lines by strikers, which have cut off power to hospitals among other places.

Engineers of state-run Ceylon Electricity Board were able to keep the country supplied with power amid a strike in 2012 with the help of outsourced ‘manpower agency’ staff.

But after ‘manpower’ were absorbed to the permanent staff by President Maithripala Sirisena amid great fanfare, have now joined the strike.

Engineers, electrical superintendents, control room operators and engineering assistants have not joined the strike, and are working night and day to keep the grid energized, officials said. The union workers have put up pictures of strike breakers on facebook making derogatory references such as ‘Anurahapura thawath weda karana horikada ballek’ (this mangy cur from Anuradhapura is still working).

Female staff who reported to work have been attacked through ‘name and shame’ facebook campaigns by the strikers and mud-slinging has also started against lady engineers, CEB sources said.

"Shame! This woman has betrayed the battle, she is working today also," a facebook.com post with a named picture of what was claimed to be a lady computer operator, working at Jaywadenepura said.

Non-technical staff are striking, demanding a salary equal to 1:6 ratio with the CEBs general manager.

The current administration has already give a 25 percent salary hike and absorbed thousands of casual workers and man power agency workers.

Among those made permanent by the current administration by Minister Ranjith Siyambalapitiya are about 1400 meter readers.

After being absorbed to the permanent staff, they promptly joined the union and reduced the number of meters the read, forcing the CEB to recruit 500 more readers.

According to a document circulated by strike breakers with salary slips with names redacted a meter reader now gets 54,420 rupees basic salary and up to 125,000 with overtime.