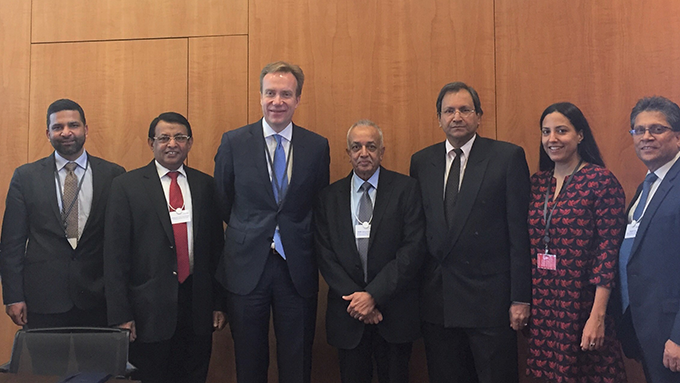 Minister Samaraweera had met Børge Brende, President of the World Economic Forum, Sri Lanka’s Permanent Mission to the UN in Geneva said discussing the possibility of hosting an investment round table in Sri Lanka in the near future.

Sri Lanka had also started talks to boost investment partnerships with The Sustainable Development Investment Partnership (SDIP), a joint invitation of the WEF and the Organization for Economic Co-operation and Development (OECD.

Sri Lanka’s engagement with the WEF had increased after Prime Minister Ranil Wickremesinghe was invited to the Davos forum in January 2016, the permanent mission said.

Philipp Rösler, the Head of the Centre for Regional Strategies and member of the WEF Managing Board had visited Colombo in July 2016, the first official visit by a WEF representative to Sri Lanka, which was followed by several delegations.

Sri Lankan Ministers had also attend WEF regional meetings in Malaysia and China, as well as for the participation of the Prime Minister and other Ministers at the WEF-India Economic Summit. (Colombo/Dec15/2018)